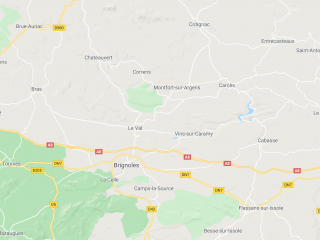 Footbridge of greenery between the sea and the scrubland, many vineyards and olive groves following one another, the peacefulness of shades reflects the softness of living.

In the East part :

Lorgues the wine castles and domains, Cotignac the charming tuff cliff hiding troglodytes grottos, Entrecasteaux its magnificent castle and garden designed by Le Notre, Le Thoronet the famous Abbey, Vins sur Caramy the castle , once the property of the "counts of Provence", Cabasse in the green valley of the Issole, Carcès the lake and 8kms of banks.

And below the motorway more South : Brignoles its palace of the "counts of Provence", La Celle the abbey and a Michelin-starred restaurant, Camps la Source famous for the abundant sources, Flassans sur Issole surrounded by vineyards, Besse sur Issole and its 4 hectares lake.

Prices generally decrease as you go inland from the Mediterranean coast. Old Mas and Bastides built of stones are still available in the north of the department. Nice traditional Provencal villas with swimming pool in the Inland offer good rental yields from Easter till October; there is a lack of gites and B&B, so still room to create some.

USE OF COOKIES
By continuing your visit to this website, you accept the use of cookies to offer services and offers tailored to your interests.
More / Accept